The existence of objects in time or, generally speaking, the existence of objects that are subject to change can be described using the notion of genidentity (genetic identity). Zdzisław Augustynek devoted a number of works to this issue, and Mariusz Grygianiec offered valuable commentaries. Augustynek tried to specify this notion by means of axiomatic definitions. He presented three sets of specific axioms. They delimit sets of theses, called systems by Augustynek and marked as AS1, AS2, and AS3. Apart from the term genidentity (G), the axioms also contain the following terms: logical identity (I), quasi-simultaneity (R), quasi-collocation (L), and causality (H). They represent binary relations whose field is the set of events S. The axioms also involve symbols of the complements of these relations: genetic difference (G*), logical difference (I*), time separation (R*), space separation (L*), and the complement of H (H*).

The results obtained by Augustynek and Grygianiec can be supplemented or even corrected in some places. This fact motivated me to analyze systems AS1, AS2, and AS3 once again. The results are presented in two separate articles: Part I (this paper) and Part II (to be published in Filozofia Nauki 25(4) [100]). The first aim of Part I is to present the set-theoretic approach to the analysis of Augustynek’s systems. Although the specific axioms themselves are expressed in the language of the algebra of sets, their analysis was conducted by Grygianiec in the classical predicate calculus. The set-theoretic approach facilitates the analysis of the sets of specific axioms. Accordingly, I present the specific axioms of systems AS1, AS2, and AS3 in the language of algebra of sets, illustrating them with Venn diagrams for five sets, expressing the specific axioms of the analyzed systems with the use of the theory of components, showing exemplary sets fulfilling those axioms, and formulating preliminary remarks concerning the relationships among systems AS1, AS2, and AS3. 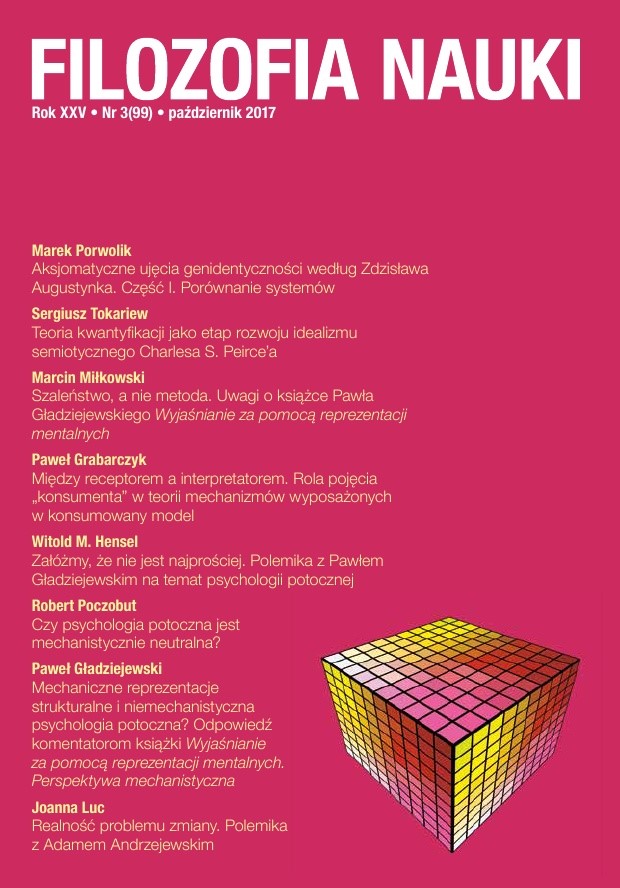